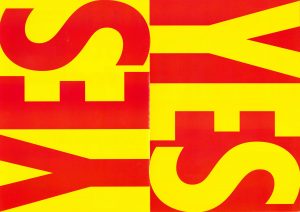 The 1997 referendum came shortly after the 1997 General Election, which saw a landslide victory for New Labour. In power, Labour quickly passed the Referendum (Scotland and Wales) Bill. The holding of a referendum on the establishment of a Scottish Parliament was not Labour policy until June 1996 and was not well received by those who had been campaigning for a Scottish Parliament and who had worked a scheme for devolution through the Constitutional Convention.

‘It was just a bolt from the blue considering what work we had done together.  It was seen as a breach of faith and we opposed it’

Labour had reached this position due to Conservative campaigning on the ‘tartan tax’ (the proposal for income taxation powers for the devolved parliament). To escape the problem and ensure there was Scottish popular consent for devolution, Labour decided to hold a two question referendum on the issue.  Voters were asked two questions whether there should there be a Scottish Parliament? And whether this Parliament have tax-varying powers?

The 1997 referendum was a pre-legislative referendum – which meant that the referendum would be held before legislation was put before parliament. However, details of the devolution proposals were published in a best-selling government White paper in July 1997. Voter endorsement for devolution in advance was also seen to make it hard for opponents in the House of Commons and House of Lords to oppose the changes.

The Referendum (Scotland and Wales) Bill was the first public Bill of the new Parliament. The two-question referendum was scheduled for 11th September, 1997. Yes campaigners felt that the early referendum helped their cause

The 1997 referendum campaign saw cooperation between the main political parties and the formation of two distinct umbrella groups to campaign for a Yes Yes or No No vote. 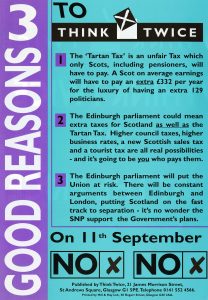 The No campaign was entitled Think Twice, a reference to the two questions that voters were being asked. The organisers included Conservative figures such as Brian Monteith and Donald Findlay.  In the 1979 referendum the No campaign had benefited from the backing of the majority of Scottish business as well as from Labour MPs. However, business opposition to devolution was much more muted in 1997 and active Labour opposition was limited to West Lothian MP Tam Dalyell  ‘I was wholly against it but the party was completely committed to it.  I was a relatively lone voice against it’ (SPA/754).

The campaign on the ground was quite low key as the majority of No campaigners came from a Conservative Party that had lost all of its seats in Scotland at the 1997 election and expected to lose the referendum too.

Organisation was described as ‘embryonic in form’ and campaigners felt that they did not have the time to build up any head of steam in the No campaign. 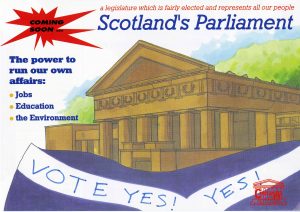 In contrast to the No campaign the Yes campaign was highly organised.  One of the key campaigners Esther Roberton described the mood of Yes campaigners following the return of a Labour Government in the General Election  ‘As soon as we knew the result of the election we had to be ready to push the button’ (SPA/776)

The Yes campaign was entitled Scotland FORward and included representatives from Labour, Liberals and the SNP.  Although each party produced its own literature in its own colours there was uniformity in design for those involved in the Yes campaign.  Although campaigning on the ground was often done separately by the individual parties, the perception was of cooperation to secure a Yes vote. Campaigners knew that this was crucial to the campaign as is illustrated by Nigel Smith, Chairman of Scotland FORward.

‘The only strategic aim of the campaign was to prevent an outbreak of argument about policy or person between the SNP and Labour’.

Many campaigners on the Yes side felt that the outcome was inevitable and that the establishment of a Scottish Parliament was, as John Smith put it ‘The settled will of the Scottish people’.  Activists recognised the danger of voters becoming bored with a drawn out campaign and planned an intensive last few weeks of campaigning before polling day.

The death of Princess Diana on 31st August, however, suspended all campaigning until 6th September, which meant that many planned campaign events did not take place.

The polls opened on 11th September and 60.4% of the Scottish electorate came out to vote, which was 3.4% less than the turnout for the 1979 referendum.  However the result was much more conclusive with 74% voting yes to the establishment of a Scottish Parliament and 63% voting in support of tax-varying powers.

This was a decisive victory for the Yes camp and paved the way for the establishment of the Scottish Parliament.   The Scotland Bill was published in December 1997 setting out a Parliament of 129 MSPs. It included details of the powers which would be reserved by Westminster and those that would be devolved to Scotland, as well as financial arrangements and tax varying powers. With the momentum provided by the overwhelming yes votes the Bill passed quickly through the Commons and Lords with minimal amendments and received Royal assent in November 1998.

‘The Scottish Parliament, adjourned on the 25th day of March in the year 1707, is hereby reconvened