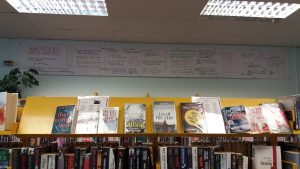 A very enjoyable day was spent yesterday installing the Bus Party exhibition in four libraries in West Dunbarton who had hosted Bus Party events in 2014.  We started in Alexandria, moved on to Dumbarton, then Dalmuir and finally Clydebank.

Many thanks to the West Dunbarton staff for allowing us to install the exhibition there.  Particular thanks go to to Allan for facilitating the exhibition and Graham for helping to hang the banner up high  in each of the libraries.

The exhibition will on display in each of the libraries until the end of August.  The banners show what each community said when asked by the Bus Party in May 2014 ‘What kind of Scotland do you want?’

Follow @Scotpolarchive
Please help us to collect photographs and leaflets of the General Election ...