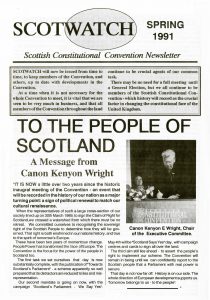 In 1988 the Campaign for a Scottish Assembly published A Claim of Right for Scotland which proposed the establishment of a constitutional convention to agree a plan for devolution. In 1989 the convention was launched with the participation of representatives from the Labour Party, Liberal Democrats, Greens, trade unions, churches and other civic bodies.

The Spring 1991 newsletter includes a message from the Chair of the Constitutional Convention Kenyon Wright.

Democracy and Devolution in the 1970s Conference
Scroll to top